Recensioni / Are private commissions the future of authorial photography? 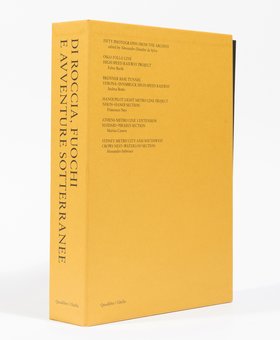 Photographers have understood this for a long time, newspapers know it but find it hard to admit: for many years now, publishing has not been the place where photography can best express itself. Whether documentary or art—and for a long time now these "genres" have been nothing more than nouns, whose boundaries are constantly falling in the fluid flow of personal expression in the present tense—publishing is not the port from which to embark on new journeys or to seek shelter. (And, please note, by "classic" we also mean online publishing, which often experiences, reiterated if not exacerbated, the same problems that paper publishing has failed to solve despite the rich legacy—conceptual and material—accumulated in its golden age).

It is in the non–publishing (not directly, not eminently) sector that photographers need to find a new key to their work. This does not necessarily or automatically mean trying to go into advertising, fashion, events, which not everyone is cut out for, but rather looking for some kind of balance, sometimes even perfect, between their own voice and what companies need to say. In short, whether it's clear Corporate Photography or a more nuanced Branded Content, one of the watchwords for the recovery of fine art photography is “private commission”.

Of course, the same economic crisis that followed the pandemic emergency, and which has worsened the situation of the publishing industry, once again legitimising in terms of budgets a short–sighted vision, is also responsible for a contraction of investments in the entire production sector, in Italy as well as abroad; but some recent examples show how private commissions can still be the driving force behind wide–ranging photographic works, a real breath of fresh air in a market at great risk of asphyxiation.

Di roccia, fuochi e avventure sotterranee (Of rocks, fires and subterranean adventures), has just been released in bookshops: a full–bodied and elegant box set (co–published by Quodlibet) that brings together the five works commissioned by Ghella to five of the most interesting contemporary Italian photographers. In fact, five plus one, because a sixth volume contains the research carried out by the curator, the artist Alessandro Dandini de Sylva, who scoured the archives of the company itself, whose history, which began in 1894, is that of "5 Generations of Tunnelers", as its claim states.

Fabio Barile worked on the Oslo Follo Line, which will connect the Norwegian capital with the city of Ski. Dedicated to commuters, the line winds for 22 kilometres beneath the national forests, and Barile's careful observation willingly crosses the border into contemplation. Andrea Botto has been entrusted with the task of narrating the excavation work on the Brenner Base Tunnel—which is set to become the longest high–speed underground link in the world—in its most traditional form, i.e. using explosives.

Francesco Neri instead flies to Vietnam, where line 3 of the Pilot Light Metro is being built, one of the most interesting new features of Hanoi's public transport system because, in a city already densely populated and stratified, it is the first to involve the underground. But in the unresigned, almost fatalistic serenity of the looks framed by Neri, there is the prospect of positive integration, destined to leave no trace of its complex origins.

Another city that presents enormous technical challenges, of course, is Athens, where the extension of metro line 3, linking the suburban and residential district of Haidari to the port of Piraeus, is now almost complete. Marina Caneve was therefore faced with almost completed works, whose insistence on the urban fabric is however not only still evident, but also a sort of “Trojan Horse” that allowed her to penetrate the city and extract a stratified account, full of meanings.

In a way the sea (Sydney Bay) and artefacts (the first indigenous boat ever found in the area) are the backdrop also to Alessandro Imbriaco's book. He has been asked to interpret the work of the Sydney Metro City & Southwest. The explorer's approach is evident right from the start in the interest in the signs left by man on the walls of the excavation tunnels, cave paintings of a civilisation that is contemporary in an exquisitely relative way, and which is producing today what will be the ruins of the future. The science fiction reference declared by Imbriaco, which is equally clear in the venture, full of mystery and fascination, into the alien world of the works in progress, does not contradict a reading that makes the space–time paradox (one of the most abused tropes in literature and cinema) its lens.

The operation is unique in Italy. The international scene is by no means new to the happy marriage of corporate communication and personal research: just think, to give a few more or less recent examples, of what authors such as Thomas Pryor or Rose Marie Cromwell have done with Airbnb, the work of Christopher Anderson for HSBC or Mark Mahaney for the Farm Credit Service of America, the contribution made by Bryan Schutmaat to Timex or John Cland to Skype, or even the case of Max Pinkers and the Olympic Foundation for Culture and Heritage; Dandini de Sylva himself, in the generous and lucid text that enriches his work, points out that it was some of the sacred monsters of documentary and research photography—Lewis Hine for the Macmillan Company and Man Ray for the Compagnie Parisienne de Distrinution d'Électricité in the early 1930s, but also Lee Friedlander for Cray Reaearch in 1987, William Eggleston for Hanover Acceptance Group in 1989, and Josef Koudelka for Groupe Lhoist in 2001—to consistently demonstrate that this path is not only widely passable but also convenient.

In the context of a fruitful and sought–after collaboration between the world of private enterprise and that of authorial photography, the most striking thing is not only the very high level of the very high level of the interpretations put in place, underlined in the fine conversations between artists and curator that close each volume, but also the open–mindedness—and therefore the true patronage—that has allowed the artists themselves to continue in these commissions a discourse already begun with their distinct research practices. On the one hand, it does not distort the work and does not undermine the ethics of the authors, and on the other, it allows readers to enter a world unknown to the uninitiated (and in fact alien to most) from a privileged, high point of view, whose decisive documentary imprint produces knowledge, while the strong interpretative and often elliptical character leaves gaps to be filled with curiosity.

“With Italy for Italy”, the large photographic campaign commissioned by Lamborghini from 21 Italian photographers (one for each region, plus a great Letizia Battaglia, the protagonist of her Palermo), moves in a direction that is perhaps more traditional in its intentions but no less amazing in its results, and was recently published by Skira.

Each photographer was given a different model of the famous car manufacturer which, despite its turbulent corporate history—during its almost 60­–year history it has passed through the hands of Swiss, French, American and even Indonesian companies, before being bought by Audi in 1998—

has always been based and produced in Sant'Agata Bolognese. Whether it's an Urus SUV or the very recent Sian Roadster, whether it's a historic Miura, a modern Huracán or an already classic Aventador, it is through the territory of a country that deserves support that passes the attempt to exalt the excellence and peculiarities that make Italy unique. Whether rural or urban, provincial or metropolitan, minimal or monumental, in many cases the landscape is the protagonist and not just a simple frame, as for example in that sort of New West recounted in Ramistella's unrecognised Molise or in the scenic Val d'Aosta contemplated in Bugani's landscaping. At other times a more performative element steals the scene, as in Galimberti's or Sommariva's settings inspired by affectionate or disquieting science fiction, or in Balsamini's skilful and evocative use of lighting, which adds a further interior dimension. Or else it is action that imposes itself, as in the concrete Piedmont marked by Mirelli's gaze, in the sly Apulia of a light–hearted Micalizzi or in the genuine and practical Sicily of a veteran of social photography like Battaglia.

The project was then embraced and taken up by the company's Asia–Pacific branch, which promoted its own version involving Jirath Wongpraywit in Thailand, Ojun Ahn and Shinseok Kang in South Korea, Takaaki Tsukahara in Japan and Michael Amarico in Australia.

Along with the automotive sector, which may not be a driving force but is certainly very representative of Italian manufacturing and design, food and beverage is certainly one of the sectors that has the most to offer, and that has done the most in terms of firepower. In this sense, The New Humanity, the artistic project entrusted by Lavazza to the Armando Testa agency, is certainly one of the most ambitious. Created during the first wave of the pandemic that forced the country into lockdown, the concept of the New Humanity—not new, but certainly necessary—proposes to unite people in the pursuit of a common idea, built on the evolution of an ethic that for years has focused on environmental sustainability and that today emphasises an ever–increasing need for social and therefore cultural responsibility. To do this, internationally renowned photographers, artists and creatives such as Carolyn Drake, Steve McCurry, David LaChapelle, Martin Schoeller, Christy Lee Rogers, Ami Vitale, Martha Cooper and Toiletpaper were asked to make their contribution, together with architects, musicians, writers, actors and fashion designers such as Carlo Ratti, Patti Smith, Alessandro Baricco, Kiera Chaplin and Stella Jean, who shared their suggestions in a magazine attached to the calendar. All proceeds went to New Horizon, a Save The Children development project focused on the fragility of India's younger generations.

In one of the darkest and least promising moments in publishing (whether periodicals or not, given that despite the fact that the bubble of the book­–object continues to swell, even aperiodicals are subject to the logic of an overbearing and often immoral market), it is clear that contemporary photography cannot rely solely on the initiative of the industrial world, just as it cannot rely solely on large institutional commissions, which are increasingly rare and whose boundaries are uncertain; yet there is no doubt that it is precisely in this dialogue, at times ambiguous but increasingly often virtuous, that it can seek at least one of the most plausible forms of its future.