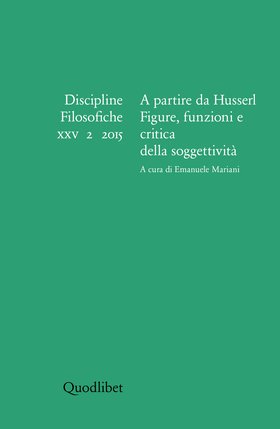 This paper re-examines the vexing issue of Husserl’s Cartesianism. Against the commonplace image of Descartes as the father of the modern turn to subjectivity or the introduction of “description from the first point of view”, this paper argues that Husserl’s orientation towards Descartes resides with his emphasis on the centrality of the problem of reason for transcendental phenomenological. Through a detailed discussion of the complex senses in which Husserl evokes Descartes in his Paris Lectures and in the Cartesian Meditations, this paper also reveals the political and cultural significance of phenomenology’s claim of Cartesianism in the aftermath of the First World War. Lastly, through a close treatment of Husserl’s critique of Descartes’ failure to fully exploit the transcendental potential of his Meditationes, this paper demonstrates how the problem of subjectivity for Husserl is firmly situated within the problem of reason; a phenomenological description of experience is not, contrary to a commonplace understanding, from the first person point of view, but more specifically, from the perspective of reason as an attitude towards human experience and knowing.